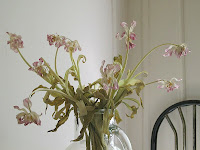 Oddly enough, I've been thinking a lot about plants lately. Last weekend, there was another dog incursion into my garden. Shortly after that, there was a disturbing dream I had where I pulled this weed directly out of my skin that had this incredibly deep and penetrative root structure. And my most recent experience was staring at a vase that held a bouquet of dead flowers on a table. (Not the same ones in the photo.) So, I guess this post will dove-tail somewhat with PF's last plant-themed post.

But out of all the above experiences, the one that I continue to turn over in my head is that vase of dead flowers. Last night, I visited my Heart Keeper. She and her ex-husband have been divorced for a few weeks now and tomorrow he will be moving out of the house they once shared. The life of every one in that family is going to have a different rhythym.
But yes, the flowers. As I waited for my Heart Keeper and her ex-husband to talk about last minute logistics and child care issues, I sat at their table. On that table was a vase of flowers that had died fairly recently. Although the flower petals were withered and half had fallen off, the stems and most of the leaves still seemed healthy enough. I touched the green, waxy leaves to confirm that feeling. I had the fleeting illusion of hope. Surely these flowers could recover if something was done with them? But of course not. They had no roots. Without roots it's just a waiting game. Death is assured.
But that's the thing with cut flowers, isn't it? They can still bloom for days and show you their glory, yet be dying inside. How long had it been since their relationship lost its roots? I certainly can't say. And I'm sure it's a nearly impossible question to answer. But I grieve for them -- for all of them.
Posted by METAwhetstone at 9:26 PM