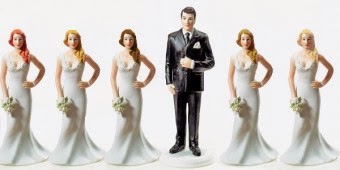 It was just this week where I was asked what I thought the biggest misconceptions about Polyamorous relationships were and I brought up one of my personal pet peeves: the conflation of Polygamy and Polyamory for - as mass media attention in the last five years has focused on Polygamists and their struggles - I feel that attention is has created an unhealthy fusion in the public consciousness between Polygamy and Polyamory and, to my horror, I learned that TLC is, in fact, planning to launch another Polygamy show called My Five Wives March 9, 2014.

TLC is building off the success of Sister Wives by quenching its viewer's voyeuristic preoccupation with non-monogamous lifestyles (certainly one moneymaking reality TV show deserves another), and  as a capitalist myself, I wouldn't slight TLC for wanting to make a buck off of its audiences' fascination with taboo. It's the spotlight on Polygamy that narrows the gap between it and Polyamory, and I suppose I've a serious problem with it.
Correcting this: polygamy is the broad term describing a marriage with multiple spouses; polygyny is where a man has many wives; polyandry is where a woman has many husbands. Thanks readers!

Both Polygamy and Polygyny attempt to describe a lawful or spiritual union between partners. Those unions may or may not be recognized by the dominant culture, and may even be considered bigamy, but they're unions that justify the plurality of their situation.

Polyamory doesn't require partners to be married although married partners can be poly; individuals may not enter into Polyamorous relationships with an intent to be drawn into a union with their other partners, whereas that's the clear intent with Polygamy and Polygyny. Polyamory isn't immediately about dating others to join into a union of any kind.

Although I appreciate the show, I often cringe at Sister Wive's LDS religious docterine that justifies the male's role as head-of-household; the featured family has often labeled the idea of the wives having more than one man in their lives as "disgusting". Within the media's portrayal of Polygamy (and its common interpretation in our country) is the elevation of the male and the subjugation of the female. Doctrine and religious convictions within Polygamy tend to reinforce sex negativism, promote OPP (One Penis Policies), and constrain female freedom.

This is quite different from Polyamory whereas religion/dogma doesn't play a prominent role in shaping gender roles. Sure, Polyamory can have configurations that look similar to Polygamy or Polygyny, and sure, partners can create rules and expectations that promote OPP-thinking. But generally speaking, Polyamory is more egalitarian about power and the ability to make individual choices concerning sexuality and relationships.

I'm a Polyamorist and, fuck no, God isn't telling me to have three partners so I can breed haphazardly and prepare a celestial kingdom for myself in the afterlife. Every one of my partners are fixed and they're not in it for my sperm, either. My partners and I don't share a common goal of world-creation on another plane of existence. This isn't something that's usually found in other Polyamorous circles. Instead there is a desire to share lives and love, to create community, and to seek emotional fulfillment through engaging in multiple relationships. Intentional community ... okay, that's something we have in common with Polygamy, but it doesn't have a religious overtone behind it.

One doesn't have to look too far beyond the Warren Jeffs of the world to find Polygamy's PR problem. Taking 13 year old girls as brides, in my mind, doesn't constitute "ethical non-monogamy" in the way that Polyamory attempts to define it. Trading partners as chattel or using them as tools for maintaining political, spiritual, or religious power also doesn't factor into the Polyamorous lifestyle.

That said, recent portrayals of Polyamorous lifestyles in the popular media from shows like Showtime's Married and Dating (which includes such memorable and astonishing dialog like "Hmm Fresh meat" and "We're Poly, and that means I get sexual access to your partners") really doesn't help matters either. That's a cluster of relationship chaos that doesn't advocate for the lifestyle but rather ridicules it.

But I think these distinctions between Polygamy and Polyamory are worth understanding.

So the media isn't perfect and neither is in the information that it's spreading about ethical non-monogamy as it favors a spectacle. Still, I've hope. There are hundreds of poly blogs out there (and thousands in grass-roots communities and discussion groups) with real people telling their stories, their normal everyday lives, and sharing their journey. That'll help get to what's real. 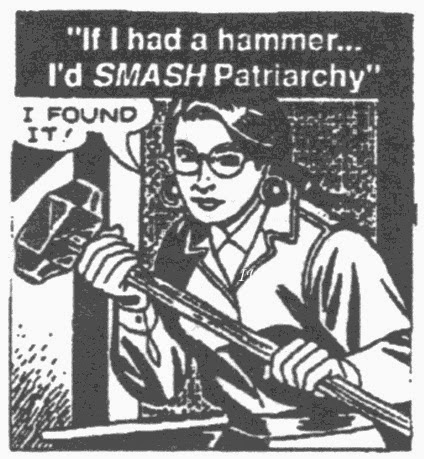 In my writing and blogging, I've always contended that Polyamory is more than a label describing sexual orientation. I feel it's a journey into opening the mind, expanding horizons, and challenging expectations and paradigms. For me, Polyamory asserts my more authentic self.

I've had some growth opportunities lately concerning these sensitive topics, yet I've difficulty in broaching a meaningful conversation about these issues for - well, for starters - I'm a man whose obvious privilege obfuscates the reality of these problems - and second - within the larger the public consciousness, Polyamory is so closely related to the politics of Polygamy that I feel it'd be really complicated to navigate potentially negative, cumbersome stereotypes.

Today, I asked my Facebook friends for help in broadening my understanding of these issues:

Over dinner, I had a conversation this evening with my partners Regina and Camille and asked for actionable ways that I could take to understand these issues, and they came up with some ideas that I may implement in March. They came up with a few sensible suggestions:

Anyway, the response on Facebook has been good so far and please, if you've any wisdom, ideas about this experiment, Polyamory and feminism, blogs, books, or sites to share, I'd love to hear about them.