As reported from Polyamory in the Media:


For many months, "Our America" on the Oprah Winfrey Network, hosted by Lisa Ling, has been filming a one-hour show to be called "I Love You & You...& You." It will air Tuesday March 5th (moved up from the 12th) at 10 p.m. Eastern Time, 9 Central. Then again three hours later, and again on subsequent dates.

Here are the trailers:

First Look: Plenty of Love to Go Around. At its core, polyamory says loving multiple people is natural. While it may seem extreme to many, half a million American families believe there is more than enough love to go around in their committed non-monogamous relationships.

Preview: Monogamy's Not for Everyone. Lisa Ling wants to know: how many is too many? There are half a million Americans practicing polyamory or committed non-monogamy. Lisa Ling meets three families who believe it is possible to love more than one person at a time.

What the Poly in the Media fellow doesn't know that the mysterious third group is out of Portland and is ...!  Well, we don't want to break a non-disclosure agreement until the episode actually airs, so, you know, all in due time, and we're excited for the initial airing of the first episode!


Lately, I've been writing some 101 articles for the blog; you can find them using the poly101 label on the site. In this article, I'm addressing a key idea behind polyamorous relationships.

A metamour is your partner's partner.

Okay, work with me. Let's play with a few scenarios.

Imagine for a minute that you're polyamorous and you've got a husband and a boyfriend. Your husband and boyfriend are metamours.

Switch it: your husband's girlfriend is your metamour.

Now, is your boyfriend's girlfriend your metamour? Sure!

Is there a criteria that you're having sex with these people? Not at all! Sex isn't required.

And is your boyfriend's girlfriend your husband's metamour?

Do metamours exist more than one jump out?  Can someone three or four hops away from you in your network be your metamour? In my circle, the answer here would be no: my girlfriend and my wife's boyfriend's girlfriend aren't metamours.

Maybe it doesn't end at a couple of hops for you. The number of hops away probably doesn't matter anyway.

Metamours have a certain connotation in our circle. A metamour is somebody with whom you don't share a direct loving relationship with but you are still sharing a relationship. You're sharing time, energy, and commitment. You're sharing another person. In our circles, a metamour is a person we're invested in. That means we spend time with these people and build a meaningful, extended community. Our metamours are our intentional family.

Yeah, okay, not all poly-peoples recognize metamours as being so familial. Some even believe that metamours owe each other nothing: they have simplistic dyadic relationships with a mutual partner and that's all. There isn't any kind of investment let alone a requirement to talk or get along. I've even seen some instances where inquisitive metamours who try reaching out to another are swatted away as being too intrusive or controlling. And I've seen metamours never meet each other - a mysterious other partner who nobody's ever met nor talked to.Yikes.

Now, this isn't bad. It's just different. And different is okay-dokey. Really.

Well, myself, I'd find it difficult to get what I want if nobody wants to talk through issues and resolve problems. If everyone is huddled up in their own little corners and incapable of finding common ground - or not interested in working together, totally ignoring their metamours or not investing themselves in their metamours' happiness - well, I think that would foster suspicion, fear, sadness, and animosity.  Who wants to introduce that kinda of Drama Llama into your life? 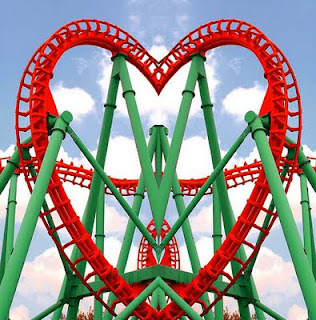 Many people, but certainly not all, seem to arrive in polyamory as part of an established couple.  They often have a high degree of entanglement on both practical and emotional levels.  Other relationships that become part of the environment find themselves, at least at first, in the position of being a version of the "latte factor", as a financial adviser once termed it.  The latte factor is the disposable income.  The money that isn't essential for keeping one housed, fed, and clothed with the utilities on.

An established dyad in poly has an emotional household budget, and it's kind of important to make sure those benchmarks are met, otherwise your emotional home (your relationship) goes into foreclosure.   This is one of the aspects of poly that can make it feel very unsettling when a new relationship of high significance, and "cost", enters the picture.  How is the mortgage going to be paid if the money is being directed elsewhere?

There are a variety of ways to manage that situation.  The most common in my experience, is that the existing partners decide to privilege their relationship and not create space in the budget for the new relationship.  The second most common, and also pretty tragic, is that one partner decides they would rather have a mortgage with the new shiny, and exits the existing relationship.

Some people choose instead to keep their relationships smaller across the board (maybe they "rent"?), with less load on any given connection, so it's more simple to make changes to accommodate new partners.

This is looking pretty dire!  Am I saying that there is no room for anything but "latte factor", or all medium-level relationships outside of deeply involved couples in poly?  No, but it does take a LOT of work and active management from all people impacted, in my experience.

Here are a couple possibilities:


I'm sure there are many other options that people have designed to fit the needs of their emotional economics within their relationships.  Please let me know what some of your creative solutions have been to "shift the budget" and make space for an additional big relationship!
Posted by Polyfulcrum at 3:14 PM 1 comment:

"We can't be seen in public. You're not my primary partner."

I suppose I find this to be the ultimate in offensive and it's the antithesis of Polyamory (open, loving, consensual, relationships). You can't put a relationship in a box - it'll suffocate. Even from a standpoint of not being out, I'd think it utterly demeaning if not an open act of cowardice. It's not something that promotes a healthy relationship; nobody wants to be a dirty little secret.

"We cannot have my other lovers in our bed."

This one's crazy to me. It's a bed. Sheets get changed. Nobody seems to have a problem staying in a hotel? No, no: I refuse to stay here until you throw out this soiled bed. And what if both parties have this wacko rule in play - now what? Where do they go? What do they do? If you don't have a guest bedroom and a spare bed, maybe they'll buy a shaggin'wagon, throw 'em in the back, drive around the block? Silly.

"We can't go to that restaurant. My wife forbid me; that's her favorite place."

Myself, I don't mind if my wife or girlfriend were to make this request, but it comes from a place of wanting to keep something unique and sacred between us. I could honor a request or two like this. I think where it becomes untenable is when everything is sacred. You can't go there ... or there ... or there, nope, not there either, and there ... certainly not. That'd be a huge problem after a while, particularly if all of the people involved enjoyed similar events and destinations. That'd be a pain.

"I'm okay to suck your cock but I'm not allowed to kiss you."

This one is a manifestation of some weird insecurity. Genital contact is a-okay but it's kissing that leads to that which is most threatening: twuu wuv. You can avoid twuu wuv if you convince your partner not to kiss anyone on the lips because that there is the path to real emotion. Oh dear. That won't stick.

"So long as my husband and I don't talk about our dates, we'll be okay."

Another variant of "don't ask, don't tell", jealousy is somehow avoided through a strategy of obscurity, as if the imagination and the unknown isn't a 100x worse than reality. It's unworkable because the unknown partner gets bigger, badder, scarier over time, up to a point where it'll get all contentious.

"He's a jealous type. If you sneak out of the house before he gets home, it'll be okay."

And how does this have anything to do with polyamory? Sounds more like cheating. More "don't ask, don't tell stuff" - purely avoidance and nobody is dealing with root-level insecurities in a constructive way. At some point down the road, people have got to meet and deal with their fears rationally or it'll get all 'splody.

"I've got to have you change your social network relationship status to reflect me!"

I guess I've seen situations where the relationship statuses were changed within hours of a breakup, or, the need for an announcement of a relationship demanded a status update in some social network. I think it's a modern day equivalent to carving your initials into a park bench, a tree, or bathroom stall. It's a public acknowledgement: I'm Dick and I'm in love with Jane! Ta-da! If it's not LIKED then it can't be real, right? I don't know ... I guess I see this one as a constant stressor where the hyper-connected partner wouldn't be fulfilled until the status update formally recognized the union.

Okay, what are some other unworkable rules that you've encountered?