Trying Things On For Size. 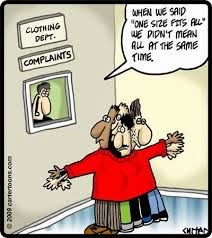 Given the nature of life, poly just seems to add accelerant to the fires of growth and change.  There are a lot of times where that can feel pretty daunting, and the impulse is to put the brakes on.  Having a voice is important, somewhere, anywhere, just to feel like one still has a say in the direction of life.

The problem is that, in poly particularly, there are other people, with their own needs and desires to consider. The desire to put the brakes on isn't likely to impact only you.  It's going to hit your partners and metamours as well.  How can that be navigated?

One of the tactics we've been working with quite a bit has been the idea of trying things on for size.  The idea being that we can choose to push into something uncomfortable, try it once, and then see if it was better, harder, or different than anticipated, make requests around changing it to something else, or try it again to get more practice, without that experiment setting a standing precedent for on-going commitments.

If it just really doesn't work, we try something totally different to meet that need.  If there was a piece that could have gone better, we look at making that piece more functional.   The end result is that it's less intimidating to attempt something that feels hard, because it's not the way it has to go in the future.

Our pod has used this technique to find solutions to being apart overnight.  Some of the things we've tried are late night dates, early morning dates, overnights with phone calls/texts on one, or both ends of the night, co-sleeping as a group, sleepovers that were in different rooms of the same space, sleeping with other people, white noise generators, medication for sleeping, extra snuggle/intimate time before leaving/upon returning, notes, music play lists, shared jewelry, stuffed animals, journaling, special decorations in each other's space, and just being uncomfortable.

Some of those ideas worked well, but the ones that bombed out didn't need to be repeated, or were adjusted to improve the outcomes.  Sleeping alone still isn't a favorite thing, but we're all getting better at it, and that's because we aren't afraid to TRY.

Posted by Polyfulcrum at 8:01 PM

Email ThisBlogThis!Share to TwitterShare to FacebookShare to Pinterest
Labels: how to, negotiation, opportunity, risk