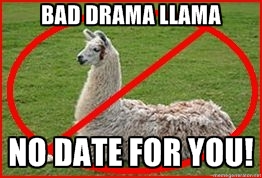 Some years ago I was talking about the personality type that enjoys conflict and chaos.  They (consciously or unconsciously) sew discord wherever they go, inviting crazy people into their life to generate a storm of turmoil.  I refer to these people as “Drama Magnets”.  These people don’t necessarily generate the conflict themselves, although they might, but they consistently select for people (friends & partners) who bring drama into their life.

I had used “Drama Magnet” for a long time, and had an inventory of personality traits and common causes for this person.  This was important to me because while I like to be helpful,  I don’t want to be a rescuer.  I don’t want to try to fix something when the person doesn’t really want that thing fixed, doesn’t seek out my input, and won’t take an active role in their own self-improvement.  When I identify someone as a “Drama Magnet” I back away slowly and insulate myself from becoming too attached.  Casual friendship is about my limit with such people.

So, I was talking about “Drama Magnets” and someone asked me, “Okay, so who are these people that actually cause all of the drama?”  I began to answer, “Persecuters”, referring to Karpman’s Drama Triangle (Victim/Persecutor/Rescuer), then stopped myself, as there are other categories of drama generation beside that one cycle.  I thought about it and came up with a funny, off-the-cuff answer.

While I prefer alliteration, I still thought my creation was fairly witty.  Little did I know that the phrase was already a thing.  I had no idea.  I’ve found references to “Drama Llama” predating 2007, and I am pretty sure I didn't make it up until 2008.

So, there are two people here that I’ve mentioned.  The “Drama Magnet”, a person who seeks chaos in their environment, and the “Drama Llama” who makes the crazy happen.

This article will be about neither.

The reason I went over that was to give an example for what I really wanted to talk about, and the label of “Drama Llama” is a fairly good example to work with.  What I want to write about is our use of labels as a means of attacking people we are in conflict with.

Name calling is one of a child’s first weapons.  After finding out that everyone will have an absolute fit if you hit other people, or throw rocks at someone, you learn that names are much easier to get away with.  Names are better because there is no bruising or bleeding (at least on the outside).  Because of that, you maintain some semblance of deniability.  Unless someone heard you say it, it’s your word against theirs.

… and so on.  There is a famous rhyme that children learn to attempt to inoculate them from name-calling, I imagine that it is familiar to everyone.

“Sticks and stone may break my bones, but names will never hurt me.”

… only, they do.  You see, name calling does hurt.  It damages different people in a variety of ways.  It is certainly not as serious as a loaded .45, but it is an activity to be taken more seriously than the above children’s rhyme implies.

I sound like some pinko socialist liberal, don’t I?

As adults, hopefully, we’ve moved on from the more crass forms of name calling that children indulge in, but please don’t delude yourself into thinking that name calling doesn’t still exist.

Being called “unsafe” is a serious accusation in a community where safety is a part of their creed.  “Safe, Sane, and Consensual” is one of the mantras of the community when it comes to identifying what differentiates WIITWD (What It Is That We Do) from a case of domestic violence.  Side-stepping for a moment the SSC vs. RACK argument (Risk Aware Consensual Kink, if you were curious), as RACK also acknowledges that the issue of relative safety needs to be negotiated, the point here is that if enough people, or the “right” people label you as an “unsafe player”, you’re going to be ostracized from the Leather community.

Any of these names may hurt someone’s feelings, but just as importantly, in a minority community, such labels hurt a person’s reputation.  The smaller the population you are looking at, the greater the severity of the offense.  If there are fewer people in a given community, it is more challenging to find others to connect to who haven’t heard the stories, the whispers, and that gives you an uphill climb, trying to convince people that the stories aren’t true.

Well, what if the stories are true?  Should we not speak up if someone IS an unsafe player?  I come down firmly on the side of saying that you should speak up.  I do, however, have some caveats to that injunction.  First, be certain.  Don’t spread second hand information.  If you didn’t witness it, you don’t know it happened.  Also, don’t go around gossiping needlessly.  If you are taking delight in this, you are probably doing it wrong.  If you are casually sharing information like this at the drop of a hat, you are probably doing it wrong.

So, let’s bring this back to poly.  Small community.  Check.  Reputation matters.  Check.  What is a name that people have hung around their neck?  A stereotype or claim made against them which would make them less appealing or attractive to other members of the community.

To me, Drama Magnets are just as bad, but far less commonly considered, so let’s stick with our fuzzy, spitting friend here.  What does this look like in practice?  Are there really people who go around and just start calling people Drama Llamas when they get upset with them?

Sometimes, yes, but not that often.  This idea however leaks out many other ways.

“Oh my God, (name) is a total trainwreck.  All of their relationships end up the same way.  I would never date them.”

“They have no boundaries.  I swear, every time I see them they are with someone new, and they treat them like trash.  It’s no wonder they go through partners like tissue.”

“I used to date (name) and I’m so glad I escaped.  (Other name) wasn’t so lucky, they are still together with (name).  I just hope that someday they can pull their head out, dump that loser, and get on with their life.”

All of these are ways that people in the poly community share information about someone else, with the intention of warning someone away from having a relationship with someone who they consider to be a poor potential partner.  A Drama Llama.

Again, if this is true, if you have personal experience of this, and if you are telling someone for a reason, not just as idle gossip, then I think that such communication can be justified.  I will reflexively hesitate, however, before engaging such behavior.  I pause, sometimes for a long time, and consider carefully my words, their accuracy, and most importantly, my motivation for why I feel moved to share such information.  This is really slippery stuff.

Besmirching someone’s reputation is an act that causes real harm.  It should never be done lightly.  We should not remain quiet when someone in our community is a genuinely destructive force.  When not handled with care it’s something that sometimes stirs the pot.  It can cause strife and conflict in a situation.  In fact, if that sounds familiar, it should be.

See, this idea of being the “Community Police” is a slippery slope.  I got together with some people recently to discuss some of these ideas.  We sat down for an afternoon of discussion about the idea of how to keep a watchful eye on our community in a proactive way, and how to intercede when needed.  I was left with the feeling that such an endeavor is incredibly delicate.  It’s not that you should never share information, it’s that you need to exercise caution and no small amount of self-awareness when you do so.

One of the stories that I remember from an Anthropology class I took about 20 years ago was the inherent gotcha that shamans faced.  As a “wise” person, who knows about natural forces, spirits, and health, they are sought out as a resource when something goes wrong.  It’s up to them to fix it.  When the problem goes away, the previously afflicted gives gifts of gratitude to the shaman and the community rejoices.  The thing is, if the problem isn’t solved, if the affliction isn’t cured, if the rains don’t come, who does the community blame?  Who knows about these things such that they would be capable of casting such a powerful curse in the first place.

Now, that’s an imperfect metaphor for this situation, but the idea that the protector or “rescuer” can easily become the “persecutor” is common, whether we’re talking about a shaman, a military leader, or a co-dependent who is acting out on the drama triangle.

Before you go around telling people how this person or that person is a massive source of drama, check your facts, and more importantly, check yourself.  Why are you sharing this information?  Did they hurt you?  Did they hurt someone you love?  What benefit will be derived from you saying this right here and right now?

If you can answer all of those questions satisfactorily, then okay, you are probably on firm ground.  If not, reserve your right to remain silent.  You can’t take back what you’ve said once it leaves your lips.  If you do say something that you later regret, and you go out of your way to publicly apologize and do all you can to make up for your error, there is still irreparable harm done to a reputation.